Sea of Thieves is an open world, multiplayer game where you must sail the 7 seas! Battle against other ships and join a crew of up to 4 people on a ship! Visit islands, sell treasure, drink beer and buy new clothes and in-game items

There's 3 types of ships:
1.The Sloop is a small ship suited to solo or two-pirate crews. It is more maneuverable and easier to operate. Its Anchor takes less time and manpower to raise, and its Helm (wheel) makes fewer revolutions. 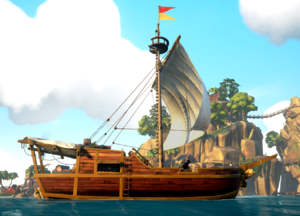 2.The Brigantine is a medium ship for up to 3 crew members. It falls between the smaller Sloop and larger Galleon in size and stats.

3.The Galleon is a large ship that can accommodate up to 4 crew members. It generally requires teamwork to operate efficiently, makes slower turns, and takes more manpower to raise Anchor — but is better-armed and much more difficult to sink than a Sloop. 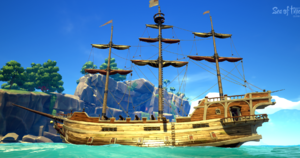 Currently, the only NPC-helmed ships in the game are Skeleton Ships. There are two types of Skeleton Ships: Skeleton Sloops and Skeleton Galleons. Skeleton Ships can be seen roaming around the Seas with their ripped sails and blue and green lanterns. Fight against a load of enemies including the Kraken, Megalodons, skeletons and snakes! Each enemy have their own drops, health and damage!

Kraken: An aquatic monster always present in the world of Sea of Thieves, previously only attacking Galleons at random. With the Shrouded Spoils update it is able to attack any type of ship.

Megalodon: The Megalodon is a monstrous shark that pops out of the ocean near player boats. All version will circle the ship, and if it is an aggressive version, it will move in to chomp your boat. With the Shrouded Spoils update there are several versions stalking the seas. 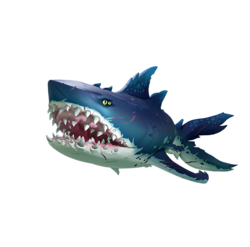 Skeletons are the most common enemy type encountered in Sea of Thieves. These cursed undead are the crewmates of Skeleton Captains and generally rise from the ground in any area these cursed Captains can be found at.